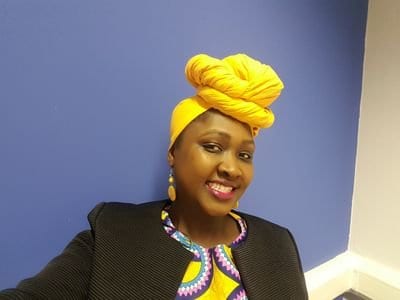 Pheona is co-founder of Radiant and Brighter, a community founded in 2012 which promotes diversity through education, inspiration and changing perceptions, after Pheona herself experienced years of unemployment as a result of immigration controls and gaps in employment support provision. Radiant and Brighter aims to deliver greater societal integration and economic participation while providing much needed support for migrant communities. Close The Gap Still not Visible research in 2019 found that around half of the BME women involved, “felt that they had been overlooked for a development opportunity because of racism, discrimination, racial prejudice and/or bias, with this rising to 61 per cent for those working in the public sector.”

The UK government Race Disparity Audit 2017 found that “1 in 10 Black, Pakistani, Bangladeshi (these two groups also receive lowest hourly pay) or Mixed background were unemployed compared to 1 in 25 among white population”. The Alison Rose review of female entrepreneurship 2019 found that women do not lack ambition and yet only 1 in 3 UK entrepreneurs are female due to the multiple barriers, where black women faced the greatest barriers.

The contribution of black women in Scotland remains undervalued and undermined, with women continuously subjected to racism, racialisation, prejudice, discrimination, unemployment and under employment.

Nearly every organisation has a diversity and inclusion/equal opportunities policy, however black women are still trapped in work environments where they can neither speak about nor raise concerns without fearing that they will either lose their jobs or jeopardise any (if at all) opportunities for career progression. There are no safe places for honest and meaningful support, so women are forced to deal with any mental health issues resulting from workplace racism on their own for fear of losing their livelihood especially when they know it is likely to be harder to find a new job. As it was put in a women’s enterprise meeting, women are faced with ‘sticky floors and glass ceilings’ where women remain in low level employment with no career progression. For black women, the ceilings are in fact concrete as everyone can see the barriers, but no one wants to challenge or risk getting involved in workplaces where values and policies are documents put together to make the company look good and not to be taken too seriously as designed to protect or reflect the actual work environment. This workplace culture of silence and ‘no change’ mentality creates conditions which force black women to lower their aspirations or work 10 times harder than others to prove themselves as capable. Black women’s contribution is not valued or appreciated because senior leaders, decision makers and other colleagues refuse to or are unable to see past the negative perceptions they have of their colour.

With immigration controls which bar many migrant women from work and ‘diversity blind’ employment practices which still allow for ‘token black women recruitment’, voices are not heard, change is minimal and black women are unable to achieve meaningful impact or achieve their full potential in the Scottish workplace.

Research shows that diversity leads to innovation and increased team productivity, with more diverse teams more likely to outperform homogenous teams. Our workplaces need to create safe spaces to talk and listen in order to create more productive diverse workplaces. Black women are not a homogenous group, they are of diverse ethnicities, have individual experiences, skills and employment journeys so we need to go beyond ‘the poster girl’ mentality and increase representation at board level and in senior management roles within the private, third and public sector. For policies to have meaning, they need to be actioned. As we ‘build back better’ Scotland needs everyone to have an equal chance to contribute both socially and economically – black women must be seen as equal and able contributors.

Scotland’s race equality framework needs to be actioned. There is an African saying that when the drum beat changes the dance must also change – we have remained out of step for a very long time. The pandemic has once again highlighted the inequalities in our systems, and I hope we have all had time to reflect and work for a better future. As the Chinese proverb says, if you want to know your past, look into your present conditions. If you want to know your future, look into your present actions, let’s act now for the future we all desire, one in which everyone is a valued and equal contributor in the Scottish society for the good of us all.