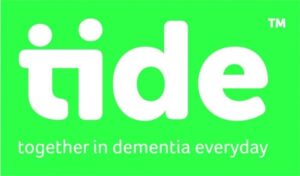 Tide (together in dementia everyday) is a UK wide involvement network for carers and former carers of people living with dementia, hosted by the Life Story Network CIC. Tide was established in 2015 when the founding directors of Life Story Network CIC realised there was a gap in the personal development of carers and former carers as individuals in their own right, which would empower them to have their voice heard and influence change. In 2017 tide started work in Scotland after receiving funding from the Life Changes Trust. Since then we have been working across the country to establish a social movement of carers that is capable of bringing about real change.

Through our bespoke and free development programme, our involvement network and influencing opportunities we empower and enable carers to have their voice heard on matters that are of importance to them. A recent example of a piece of work tide carer members have started is a campaign on carers being considered as individuals in their own right, rather than being ‘added onto’ that of a person with dementia.

It is important to consider the vital role older women play in providing unpaid care to a person with dementia. The majority of carers of people with dementia are women. Many older women provide ‘round-the-clock’ care for their husbands and partners with dementia and consider this part of their marital duty, it is simply something they have to do because of the vows they took and the love they feel. They have internalised the societal pressure that is placed on women to provide unpaid care. They are not recognising the extraordinary contribution they themselves make both to the person with dementia’s life and to the Scottish health and social care system. In addition, no-one else recognises or values this either.

In the context of the dementia landscape, strategy and policy, unpaid carers and family members are generally included as an adjunct to people living with dementia. They are referred to as “and their carers”. tide and its individual carer members consider that the specific needs of carers of people with dementia should be recognised and addressed more fully. Our members are arguing that unpaid carers of people living with dementia are effectively discriminated against as they are not being recognised as individuals in their own right, with their own special needs and a right to have a life outwith their caring role.

All dementia strategy resourcing, support, services and information is developed for the person living with dementia. Unpaid carers and family members, often older women, contribute to that resource by giving of themselves freely and willingly in their caring role, without necessarily getting support for themselves or having their voices heard as “partners in care”. Instead the focus of dementia policy should be on the individual groupings such as “people living with dementia” OR “unpaid carers”.

Being recognised as an individual grouping and not as an adjunct “and their carers” will help acknowledge carers rights and help unpaid carers fight for their rights to a life outwith caring and benefits they may be entitled to.

This group of tide carers is calling for the adjunct “and their carers” to be dropped in all future written and verbal communication to address the inequality.

If you are a carer or former carer of someone with dementia and are interested in campaigning on this or a different topic that matters to you, please get in touch with tide.

If you want to know more about the work of tide in Scotland, get in touch with us via carers@tide.uk.net or call us on 0141 353 5607. You can also get in touch through twitter.