Feisty Women is a Scottish charity (SC049016), set up in 2018 to advance equality and economic justice for women over the age of 60.

Many of us face financial hardship because of age discrimination and a lifetime of sex discrimination, with a major issue being the increase in the state pension age for this group of women from 60 to as much as 66. We want equal access to resources and to have a voice in the public arena. Feisty Women is politically neutral and welcomes membership and support from all groups and a broad range of opinion formers and influencers. 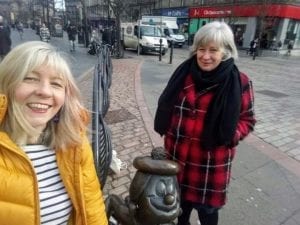 In 2019,  Feisty Women has three priorities:

We have spent a full year researching what we believe has been a failure of the UK Government to justify their decision to “equalise” the state pension age for men and women under the 2011 Pension Reform Act. Feisty Women contends that the true reason for the unexpected 2011 increase in state pension age for women was not high-minded equality principles for men but a quick win austerity measure where women were seen as disposable resources.

Our goal is to secure damages for fifties-born women on the grounds of age and sex discrimination because we have been hurt.

Importantly, we also want to test the effectiveness of enforcement measures allowed by the 2010 Equalities Act. As far as pension discrimination is concerned, there appears to be no obvious route through the legal system for women wanting to make a complaint on the grounds of discrimination.

Feisty Women will receive an initial analysis of options by the end of April.

Feisty Women believes that the voice of older women is absent from national debates about discrimination and inequality. We need new, innovative solutions to solve the problem of inequality in society, grass-roots up. The experience and knowledge of women who have been fighting discrimination all their lives have an important part to play in debates.

Fifties-born women have faced a lifetime of sex discrimination and financial disadvantage. We were pioneers. Many of us went out to work on a larger scale than ever before but we also shouldered a disproportionate share of domestic work and unpaid caring responsibilities.  This resulted in fragmented working lives, poorer paid jobs, part-time jobs, little opportunity to pay into occupational pension schemes, long hours detrimental to the health of many, unequal pay and discrimination in the workplace. Our life experience is described by economists as a ‘double burden’. The intensity of our paid and unpaid labour has been damaging to our health and economic well-being.

In 2019, through events, publications and contributions to policy debates, we would like our voice to be heard.

In 2019, as a first step, Feisty Women wants to share knowledge about the reality of the economic participation of fifties-born women across our lifetimes by commissioning a literature review from a feminist economics perspective.

Feisty Women welcomes interest and involvement from anyone who supports our cause. We are a membership charity (free) and membership is open to anyone over the age of 16. Members will have an opportunity to have a say in the running of the charity.

Throughout the year, we will run events as part of our campaigning and would be delighted to have as many people attend as possible. Events will be widely advertised.

We will have our web site up and running within the next couple of weeks so all news will be posted there, on Twitter and on our Facebook group (Feisty Women.)

Donations to support the work of Feisty Women would be very much appreciated and can be made through GoFundMe under Fight-Pension-Discrimination (remember to put in the hyphens).

Please do get in touch with Feisty Women.

The website is in the process of being designed and should be live in the very near future – it will be www.feistywomen.co.uk

We currently have a Facebook group (private) called Feisty Women which we would encourage people to join until we get our website up and running.