The Close Your Pay Gap tool was developed to help employers to close their gender pay gap. It is an online tool, aimed at private and third sector employers who are publishing their gender pay gap figures under the new reporting regulations. The tool uses an employer’s pay gap data, along with a series of questions, to provide a personalised action plan to help them to close their pay gap.

Our central aim in developing the CYPG tool was to harness the momentum of the new UK Government regulations, which require large employers to publish their gender pay gap information for the first time, and support employers to use this information to not only understand the particular causes of their gender pay gap, but to take action to tackle it. 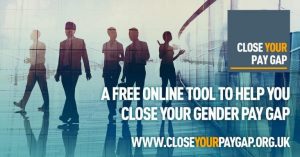 Reporting under the regulations has shown what we already know: that women are under-represented at senior levels, and persistently over-represented in the lower-paid jobs in all organisations. A lack of quality part-time and flexible working means that many women who require to work part-time to accommodate their caring roles become boxed in, unable to progress into overwhelmingly inflexible senior roles, and end up working below their skill level. The gender pay gap contributes to higher levels of women’s poverty and child poverty.

The under-utilisation of women’s skills is a drag on growth, contributing to sector-wide skills shortages. Research by Close the Gap established that equalising the gender gap in employment could add up to £17bn to Scotland’s economy.

There has been little progress on narrowing the pay gap in recent years. The gender pay gap will not close on its own, and it’s time for decisive action from employers to help close the gap.

As part of the next phase of the project we looked at a cross-sectoral sample of 200 Scottish employers who reported their gender pay gap in order to get a more granular picture of the pay gap at the enterprise-level but importantly to identify what employers plan to do to close their pay gap.

We know from the experience of the Scottish public sector that reporting alone does not create change. There is a clear space for the CYPG tool to enable employers to use gender pay gap reporting as an opportunity to create better workplaces for women, and to take a step towards gender equality at work.

We will be working to further publicise the tool, and continuing to support employers who are doing or wish to do work to close their gender pay gap.

We’re calling for employers to use our tool to enable them to develop tailored, meaningful actions to tackle their gender pay gap, and make their workplace better for women. Employers that take steps to reduce their pay gap are more productive, more innovative and more profitable, and are able to draw from a wider pool of skills and talent. The Close Your Pay Gap tool helps employers and employees to access the business benefits of gender equality.